A small scale hydropower plant, Sandvik, has been realized on the west coast of Norway thanks to the Dutch high-tech company ASML and ECOHZ GO². We interviewed Egil Kambo to learn more about Sandvik and the renewable energy project – from planning to delivering clean electricity to the grid.

Norway is full of ideal locations for small hydropower plants, and hundreds of power plants have the necessary permits in place and are ready to be built. However, many of them lack the final financing necessary to initiate construction. ECOHZ GO2 is a high impact renewable energy product that combines the purchase of documented renewable power with financing and building of new renewable power capacity.

Recently, the ECOHZ Renewable Energy Foundation enabled four windmills to be built in Sweden. Now a small-scale hydropower plant, Sandvik Hydro Power Plant, has been realized on the west coast of Norway thanks to ASML – the Dutch technology company.

We interviewed Egil Kambo from KAMBO Energi, the man and company behind the construction of Sandvik Hydropower Plant, to learn more about Sandvik and how this new renewable energy production in Norway was brought to the grid.

Why is Sandvik special?

Sandvik lies nestled at the end of a fjord on the west coast of Norway. In 1917 Sandvik was a small community of farms with a small-scale hydropower plant producing power for them. Unfortunately, during a cold period in 1942, the power plant froze and the turbine was destroyed.

Since then, the community has been without power. Now 100 years after Sandvik was built, the European market has become interconnected with international power lines. Sandvik will not only bring electricity to the local community again, it will produce renewable power for the European grid.

How did you realize that Sandvik had the potential to once again be a source of renewable energy?

The local community and landowners had been considering restarting Sandvik Hydropower Plant for a while. We considered different options, including creating a shareholder company and attracting external investors, but we never found a way to realize it.

It was when we connected with ECOHZ that we first understood that Sandvik could be a source of power for the local community once again. It started as a conversation with Knut Olav Tveit, the managing director of the Norwegian Small Scale Power Producers Association. He asked us about our plans for the future, and we told him that we had a project with the necessary permits, but it was lacking the final financing. Knut Olav Tveit told us that ECOHZ had a product dedicated to realizing renewable energy projects like ours. We were then introduced and have cooperated since. 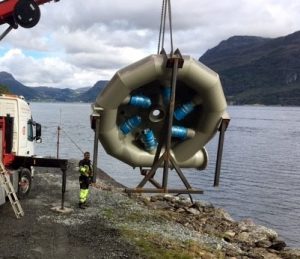 Did you meet any other challenges before the project initiation, besides lacking the last financing?

We encountered a few issues when one of the land owners wanted to take advantage of the forest resources on their property. This resulted in a delayed project execution, but we benefited from being able to use the roads that the land owner built during a lumber operation.

Were there any special environmental considerations during this project?

We kept ECOHZ informed and were all committed to completing the project. Working with ECOHZ was a positive experience – when we asked questions we got the answers we needed. ECOHZ was the partner we needed to realize the project. Without them and our positive working relationship we would not have had the financial capabilities to complete the project, or a reason to work through the hurdles we encountered.

How was ASML involved?

It was important to ASML that they created new renewable energy for the grid. They have participated in all parts of the project execution, including site visits before the project was initiated. In the end ASML found out that Sandvik Hydropower Plant was the project they wanted to support in order to bring more renewable energy to the grid. They have been engaged, interested, asked questions and paid attention to the developments as they occurred.

What does this project mean for the renewable energy industry in Norway?

The fact that this project was realized has positive effects. There are many similar projects in Norway that have necessary permits in place, but are lacking the final financing. GO2 can potentially helpland owners realize their projects as well.

An analysis conducted by the Norwegian Small Scale Power Producers Association also shows that these types of projects are greatly beneficial to their local communities, as most of the investment goes to local industry and labour. This is increasingly valuable, as many of these power plants are located on the west coast of Norwegian, where workers and industry are affected by declining oil prices.

What is also unique to Norway is that the landowners in the drainage basins that feed hydropower plants have rights to proceeds from hydropower plants that are fed by their lands. This means that regardless of who owns and executes the projects in Norway, local landowners will benefit. This is not the case in other parts of Europe.

What other trends are you currently seeing?

Small-scale hydropower plants need to be increasingly cost efficient to make financial sense. This means that financing is more difficult to come by. Products like GO2 are therefore quite important if Norway is to realize the 300 – 400 hydropower projects that have permits but lack final financing. 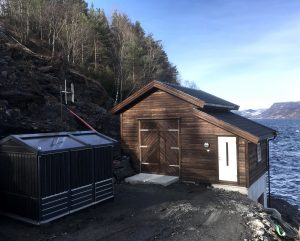 We also believe the entire small-scale hydropower industry will trend towards the construction techniques we used for the Sandvik power plant. This is the seventh hydropower project KAMBO Energit constructs and we have gradually developed a more cost-effective construction and implementation techniques. Specifically, we did everything we could to simplify construction, while still building a robust and high-performance power plant. We have refined the turbine design to reduce the size of the total structure, and used a module based approach.

When you can ship modules of a power plant in one piece, for example the intake-house, you reduce both the risk of something going wrong during construction and the time it takes to complete. The cost savings and risk reduction this achieves may lower the threshold for undertaking a hydropower project.

Do you have any advice for other companies like KAMBO Energi that build and operate hydropower plants?

Get in touch with competent people who can help you design and construct your project. There are many of them out there, considering how long we have been working with hydropower in Norway. Then get in touch with actors like ECOHZ that can help with the final financing.

Land owners should also act now. There may be changes to the EL-certificate support scheme, and price levels are always changing.