How transportation can run on renewable electricity

Many people who travel are concerned with their carbon footprint. Transforming the transport industry to run on renewable energy is vital for a more sustainable society. But where does the renewable energy come from? How can transportation that runs on electricity, like trains or electric cars, run on renewable energy when they draw power from the European energy grid? A significant share of the electricity on the European grid comes from fossil fuels so travelling by electric trains or electric cars is not 100% clean unless the consumption is documented with Guarantees of Origin.

“The source of the power being a sensitive topic in the field of electric mobility, I wanted our company to take responsibility as a provider of charging infrastructure using the Norwegian company ECOHZ, European leader in the field of Guarantees of Origin, to assure and document the origin of the power delivered”. François Randin, CEO of Green Motion

Norway has the highest number of electric cars per capita in the world. Norway’s electric vehicle success story was amongst others driven by an “incentive” package for electric vehicles that includes no VAT on electric vehicles, reduced road taxes and free parking in public parking areas.

Trains can run on fossil fuel or renewable energy. ECOHZ ensured a carbon free travel to COP 21 by a network of trains from Asia and across Europe to Paris was running on renewable energy. The trains were full of official delegates and journalists going to COP21 in Paris.

“We are delighted to support carbon-free travel to a United Nations COP meeting. The use of renewable energy is a key issues for our future. The UIC strategy for 2030 and 2050 aims at carbon-free railway operation in Europe and very-low carbon rail transport worldwide.” Nick Craven from the International Union of Railways. 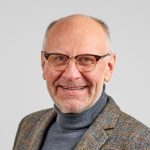 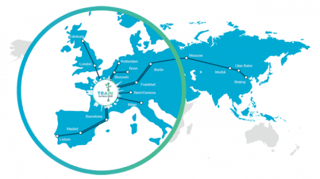 A network of trains will arrive in Paris from Asia and across Europe, bringing official delegates and journalists to COP21. Trains departing from Beijing, Ulan Bator, Moscow, Berlin, Bonn, Rotterdam, Brussels, Milan & Lisbon will enjoy carbon-free travel. In fact, most of those trains will even contribute to producing new renewable[…] Read more … 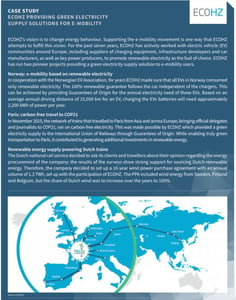